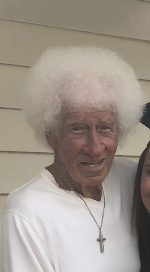 Donald G. Linton, otherwise known as Dado, passed away at his home on March 4th at the age of 85, surrounded by his family and beloved dog Angel. Don was born July 30, 1935 in Elkhart to Arshel and Margaret Linton. On December 31st, 1957 Don married the love of his life Eleanor “Ellie” Skatvold. They were blessed with 59 years of marriage and proudly raised 4 children together. After growing up on a farm in Middlebury, Don then joined the Marines where he served in Korea as a military police officer and excelled in military boxing from 1953-1956. When he returned home from Korea, Don went on to serve with the Elkhart Police Department from 1962-1983. He was well known and respected throughout the community and was nicknamed the ‘”Silver Fox” for his distinguished silver hair. To Don's amusement, he was suspended a few times in the late 70’s and early 80’s for refusal to cut his signature afro. Upon retirement from the Elkhart Police Department in 1983, Don and Eleanor started their own lawn care business, which they took great pride in and enjoyed for many years to come. Ellie and Don loved their children and grandchildren immensely. Their enjoyment of the sun took them to Bradenton, FL during the winters and the summers were spent at their home in Elkhart, poolside surrounded by family and friends. Through the years, the Linton’s had many cherished dogs and cats. Angel was well known at River Oaks Community Church and never missed a Sunday. Don was best known for his afro and love of telling stories, pink sweaters, short shorts, and his passion for a good or free deal. Don “Dado” will be greatly missed by his children, Robin (Johnie) Fizer of Elkhart, Debra (Michael) Brick of Elkhart, Dawn (Gary) Pontius of Dowagiac, MI and T-Joe Linton of Bonita Springs, FL; his grandchildren, Tammy Scherer, Jonathan Fizer, Donda Ralston, Melissa Brick, Erin Brick, Jennifer Brick, Megan Peterkin and Brock Linton; 10 great grandchildren and 3 great-great grandchildren; his siblings, Larry Linton, Roby Robinson, Susie Linton and Johnny Linton and his beloved dog Angel. Don was preceded in death by his parents, Ellie (in 2017) and his siblings, Ronald Linton, Nancy Linton and Karl Robinson. A celebration of Life service for Don will be held on Saturday, April 10, 2021 at 4pm at River Oaks Community Church, 58020 CR 115, Goshen, IN 46528 where friends may visit with family 2 hours before the service. Pastor Scott Tilly will officiate. In lieu of flower memorial donations may be made to the Humane Society of Elkhart County, 5687 CR 19, Bristol, IN 46507 or www.humanesociety.org Stemm-Lawson-Peterson Funeral Home, 1531 Cobblestone Blvd., Elkhart, IN 46514 is assisting the Linton family. Online condolences may be made to the Linton family at www.stemmlawsonpeterson.com

To send flowers to the family or plant a tree in memory of Donald G. Linton, please visit our floral store.