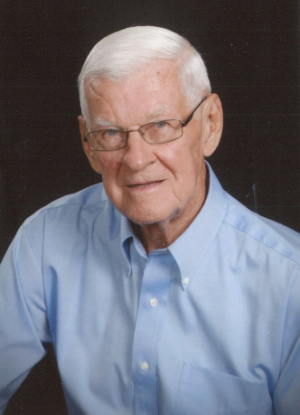 James “Jim” M. Troup, age 88, of Elkhart passed away on Sunday, December 6, 2020 at Elkhart Hospice House. Jim was born on April 20, 1932 to Virgil and Helen Troup in Elkhart, IN. Jim married his high school sweetheart, Rowena A. Pletcher, on February 1, 1953 at the First United Methodist Church in Elkhart.

Jim was a devoted husband and father, who took great pride and joy in helping to raise his two sons, Bill and Jim. He shared his love of sports with them, and coached their respective little league baseball teams for many years. Jim was an avid fisherman, mushroom hunter, handyman, and sports enthusiast. Jim attended Elkhart High School, and the highlight of his time there was playing varsity basketball for the Blue Blazers. The friendships he made on and off the court became a bond that would last a lifetime.  Jim was a member of Trinity on Jackson in Elkhart.

After a successful 40-year career as a manufacturing engineer at Elkhart Products, Jim retired in 1994. His retirement years were spent enjoying the things he loved best – visiting his children and grandchildren in Arizona and California, traveling, fishing, watching and attending sporting events, painting and gardening.

Jim is survived by his wife of 67 years, Rowena Troup; their sons James (Jim) Troup of Oakland, CA and William (Bill) Troup and his wife Betsy of Scottsdale, Arizona. Jim adored his 6 surviving grandchildren:  Tyler, Karley, and Alexa Troup and Daniel, Nicholas, and Anna Troup; and his 3 great-grandchildren Aria, Emma, and Henry.  Jim is also survived by his dear brother and sister-in-law Butch and Kathy DuBois.  Jim was preceded in death by his parents, his brother Wilbert Troup, and sister Norma Macumber.

Stemm-Lawson-Peterson Funeral Home, 1531 Cobblestone Blvd., Elkhart IN 46514 is assisting the Troup family. Online condolences may be made to the Troup family at www.stemmlawsonpeterson.com

To send flowers to the family or plant a tree in memory of James M. Troup, please visit our floral store.