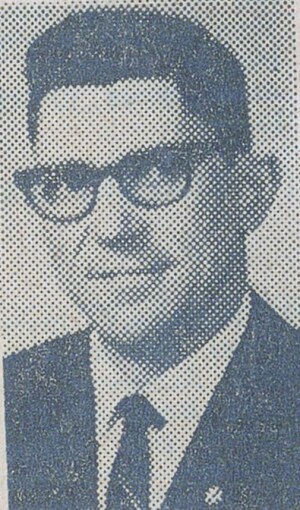 Bill graduated from Elkhart High School in 1948 and was a Miles Laboratories Scholarship winner and attended the University of Arizona for several years. He began his banking career with First National Bank as a messenger while still in high school in 1947 and returned in 1952 as a full-time employee. He held various positions in the bank including: Assistant Manager of the Bookkeeping Dept, Auditor Manager of Data Processing, Controller and Manager of the Accounting Division. He also served as Secretary for the Board of Directors and Executive Committee for 25 years during his tenure at the bank, retiring in 1990.

He was past treasurer of Elcona Country Club and enjoyed curling at the club; also past president of the Elkhart Breakfast Exchange Club and past treasurer of the Elkhart Vintage Auto Club. He was a member of Trinity on Jackson, formerly known as Trinity United Methodist Church and served as past head usher, president of the Board of Trustees and a member of various committees.

During his retirement he enjoyed gardening, collecting old cars and having them restored, plus attending various car shows and swap meets. He also enjoyed spending the winter months in Arizona.

Stemm-Lawson-Peterson Funeral Home, 1531 Cobblestone Blvd., Elkhart, IN 46514 is assisting the Goodsene family. Memorials my be given to Trinity on Jackson Church Foundation or the Parkinson’s Foundation. On-line condolences made at www.stemmlawsonpeterson.com

To send flowers to the family or plant a tree in memory of William E. Goodsene, please visit our floral store.